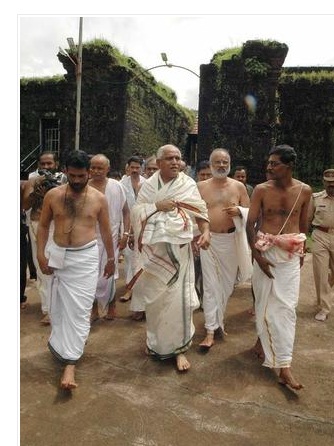 Karnataka Chief Minister B.S. Yeddyurappa offered worship at some temples in the district on Thursday amid the political crisis faced by his government following the decision by 19 MLAs to withdraw support to the BJP government. Mr. Yeddyurappa termed the visit a private one. This was not his maiden visit to the temples here, including Sree Raja Rajeswara Temple at Taliparamba. But, his past visits seeking the blessings of the Lord Siva at Sree Raja Rajeswara Temple and other temples here had not attracted as much attention. The political crisis his government is facing now appears to have added a sense of importance and urgency to his trip to the temples.
After offering worship at Sree Raja Rajeshwara Temple, Mr. Yeddyurappa exuded confidence that the problems that had put a question mark over the very survival of his government would be solved amicably. Talking to journalists outside the temple, he said he was confident that the dissidents would come back to the fold and support him when he seeks the trust vote in the Assembly.
The Chief Minister reached here by helicopter from Mangalore. The helicopter landed at the helipad of the Defence Security Corps Centre here at 9.45 a.m. Mr. Yeddyurappa went to the Government Guest House and from there to the temple by road. On the way, he offered puja at Mahaganapathi Temple at Puthiyatheru. After offering worship at the temple at Taliparamba, he drove to Madayi Kavu Bhagavathi Temple at Pazhayangadi here, another of his favourite destinations. He left for Mangalore by helicopter at 2 p.m.
The Chief Minister was accompanied by his Cabinet colleague, Information Technology Minister Katta Subramanya Naidu, the former Medical Education Minister Ramachandra Gowda and his son Raghavendra. District Bharatiya Janata Party (BJP) president K. Ranjith and secretary U.P. Jayathan also joined the Chief Minister during his visit to the temples.
According to BJP circles here Mr. Yeddyurappa has been visiting the temples here over the past several years. During his earlier visit to the temple at Taliparamba, 25 km from here, in November 2008, he had offered an elephant. His last visit to the temple was on December 26 last.
Special security arrangements were made in and around the temples in connection with the visit of the Karnataka Chief Minister. A large number of police personnel were deployed in the temples in view of the visit.
Keywords: Karnataka political crisis

I'm not I View all posts by renjiveda