Yoga has become an important aspect in the life of the people, which is an honourable achievement for the country that has given Yoga to the world,”

1. Take the message of Yoga to every person and house.

3. All people from every walk of life must benefit from Yoga.

Yoga has become an important aspect in the life of the people, which is an honourable achievement for the country that has given Yoga to the world,”

1. Take the message of Yoga to every person and house.

3. All people from every walk of life must benefit from Yoga. 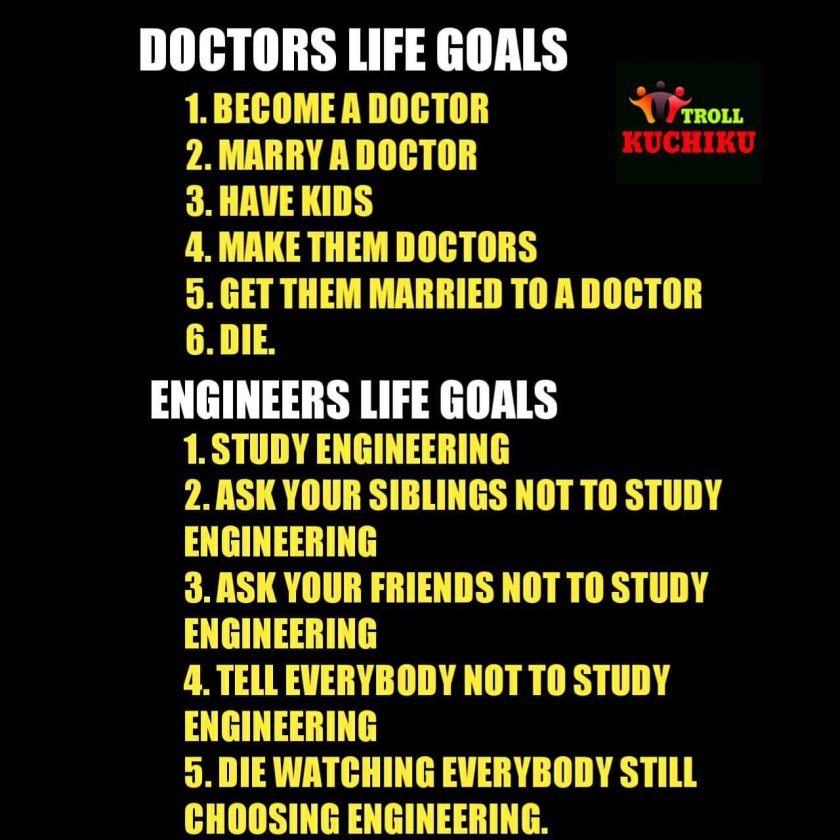 om Sri Ram! Jai Ram!
Jai Jai Ram!!!
This year, many of us will be celebrating the ‘Sri Rama Navami’ on the 1st of April, which ironically coincides with the ‘April Fool’s Day’. Therefore in honour of this Rama Navami day, let us try to introspect as to, who the real fools are. 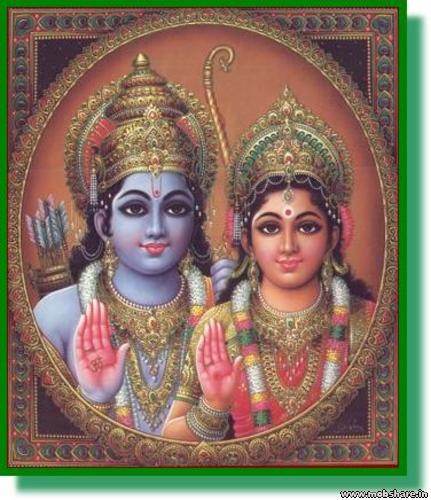 Among the many foolish things which people indulge in, the human act of finding faults with Avatars, Spiritual Masters, Mahatmas and Saints, is the most foolish, as man is trying to judge someone who is beyond his limited intellect, by doing so. The tongue was gifted to us by God, not for meaningless gossip, but for chanting the Divine Name, which would gradually free us from bondage.
The ignorant subjects of Ayodhya gossiped and spread rumours unaware about the purity, chastity and greatness of the Divine Mother, Sita. Sriramji was FORCED to send her to the forest, due to the disgraceful comments passed by the ignorant masses in Ayodhya. Now too, people instead of chanting the Lord’s Name, continue to gossip as to why Sri Rama sent Sita to the forest.

So too our Divine AMMA has carried out numerous charitable activities like constructing more than 5000 free houses for the tsunami victims, more than 2000 houses for the Gujarat earthquake victims, 715 houses for the north Karnataka flood victims, pensions for more than 50,000 widows, scholarships (Vidyamritam) for more than 25,000 children etc. and yet, the people, who are immersed in the ocean of ignorance, continue to criticize her.
Sriramji was accused of belonging to the so called superior ‘Aryan’ race who were renowned for suppressing the Dravidians. But this is far from truth. The lord, while in exile accepted Guha, a mere tribal man and a boatman as his 5th brother, Sugreeva who was half man and half monkey as his 6th brother and Vibheeshana, the demon prince as his 7th brother. Moreover Sri Ram Ji even accepted the fruit offered by Shabari, who first guilelessly bit the fruit herself, in order to know its taste. The purpose of the lord’s Avatar was not only to destroy the evil demons and bestow Dharma, but also to integrate the diverse beings existing in this universe into one cosmic family. It is said that all the beings in the universe like Gods, Humans, Demons, Vanaras, Gandharvas, Kinnaras, and Yakshas etc took part in Sriramji’s coronation like one cosmic family. So too in Amritapuri, people from all nationalities live as one universal family. 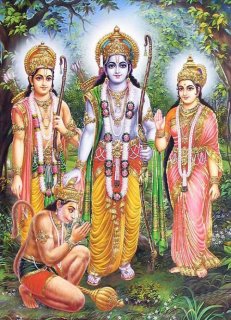 Our Divine Lord Rama was subjected to other accusations as well. Why did Rama kill Vali hiding behind a tree? It must be noted that when Sri Rama was sent to the forest, he remained a KING, though in exile. He therefore had the bow with him even in the forest as it is a king’s duty to uphold Dharma. At that time Kishkinda was under the territory of Ayodhya. Vali, the ruler of Kishkinda had grievously wronged his younger brother, Sugreeva. Vali suspected and questioned the brotherly devotion of Sugreeva, who was in fact totally guileless and innocent. Vali chased Sugreeva to the forest and took away Sugreeva’s wife, making her his own, forgetting that a brother’s wife is equivalent to a daughter or a sister. Therefore this unrighteous king, Vali had to be killed. However Vali could be killed only in hiding, due to a boon which Vali had acquired, which gives him half the strength of his opponent who fights him face to face.

Again, why did Sriramji send Sitaji to the forest? It is commonly believed that Sri Rama decided to abandon Sita, the embodiment of purity and chastity due to the criticism of ONE ignorant Dhobi or washer man. On the contrary, Sriramji knew that if a mere washer man could so loudly and fearlessly criticize him; it was because the washer man was merely repeating the general opinion of the other people of Ayodhya. This led the Divine Lord to conclude that there were many among his subjects who were dissatisfied with Sitaji being their queen. He therefore made up his mind to send Sitaji to the forest as a righteous king would.

A human being has 2 kinds of Dharma or duties, namely: Mukhya dharma or main duty and Gauna dharma or secondary duty. A king’s Mukhya Dharma is to act according to the welfare of his subjects. On the contrary, for a common man, protecting his wife and children is the main duty. A righteous king would always regard the well being of his subjects as the most important need. Such a king gives only secondary importance to family, for; his subjects are most dear to him. Therefore, The Divine Lord Rama, the epitome of righteousness, and the ideal king, sent Sita to the forest for the general well being of the society. 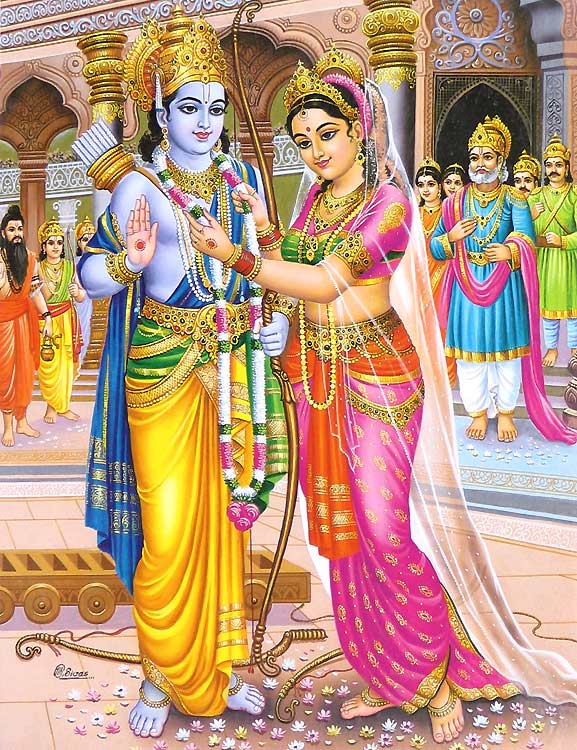 Sriramji’s specific instruction to Lakshman, while sending Sita to the forest, was: “Take Sita to the forest and leave her near Sage Valmiki’s hermitage”. Mother Sita was expecting when she was sent to the forest. Thus Her sons, Luv and Kush, who grew up in the peaceful Ashram atmosphere, received the best training and education from Sage Valmiki himself.
Thus we see that every single action of an Avatar or Mahatma has a deep lying meaning behind its seemingly meaningless looks. We, after earnest introspection, tend to find oceans of knowledge hidden behind every thought, word and action of such Great Souls. 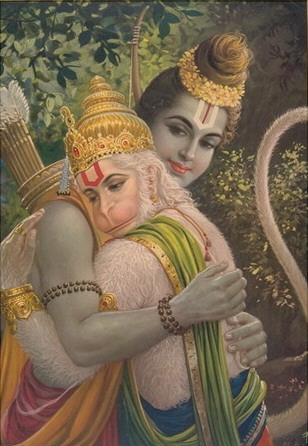 Let us pray to Amma and the other Great Masters to bless us with the Right Understanding, Faith and Strength to walk the Path pointed out by them, to reach the Ultimate Goal, which is Absolute Freedom, Peace and Bliss.
Om Tat Sat