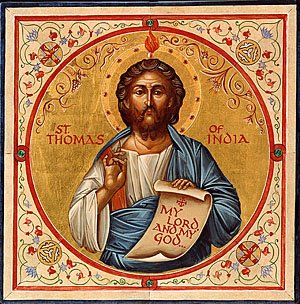 St.Thomas the Apostle, also called Doubting Thomas or Didymus(meaning “Twin”), was one of the Twelve Apostles of Jesus.

His name derives from a Hebrew root, ta’am, which means “paired, twin”. In fact, John’s Gospel several times calls him “Dydimus” a Greek nickname for, precisely, “twin”. The reason for this nickname is unclear.Thomas was also called Didymus which in the Greek means Twin or Double.

He is best known for disbelieving Jesus’ resurrection when first told of it, then proclaiming “My Lord and my God” on seeing Jesus after touching his wounds on the side of the chest.

He was perhaps the only Apostle who went outside the Roman Empire to preach the Gospel. He is also believed to have crossed the largest area, which includes the Persian Empire and Bharatha

The Twin of Thomas

………..the question, who is Thomas’ twin?
Could be me, could be you.
Could be each of us and all of us together,
as we summon the courage to doubt our doubts,
as we read and study the gospel
seeking answers to questions.

He came to Kerala

The origin of Kerala’s Christians dates back to 52 AD, when St. Thomas came to the region landing in the port of Cranganore near Cochin. He visited different parts of Kerala and converted local inhabitants including many from the upper sect known as Namboodiri Brahmins. It is also believedthat St. Thomas established Churches in seven places in Kerala ( Kodungallore, Palayur, Paravur, Kokkamangalam, Niranam, Chayal, Korakkeni, Kollam) and a chappal (half church-”Arappalli”) at Thiruvankottu.