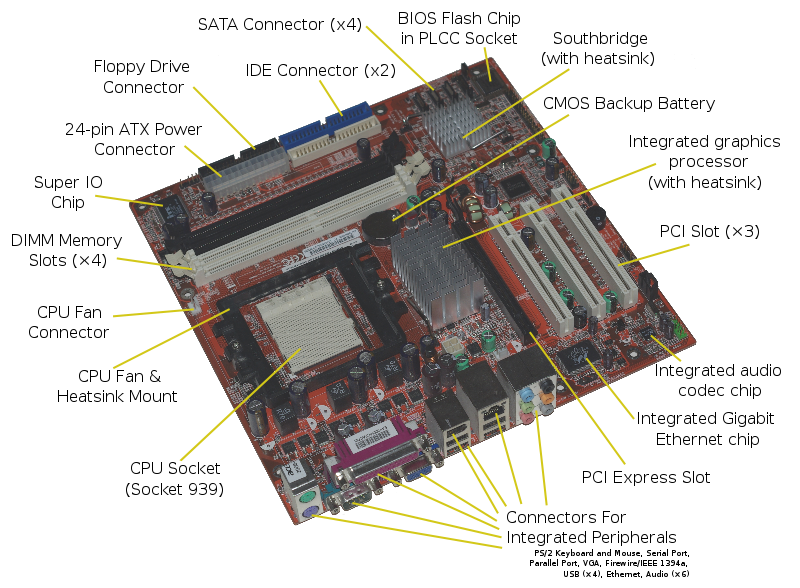 The primary component of a computer is the motherboard (sometimes called the “mainboard”). The motherboard is the hub which is used to connect all of the computer’s essential components.
As its name suggests, the motherboard acts as a “parent” board, which takes the form of a large printed circuit with connectors for expansion cards, memory modules, the processor, etc. 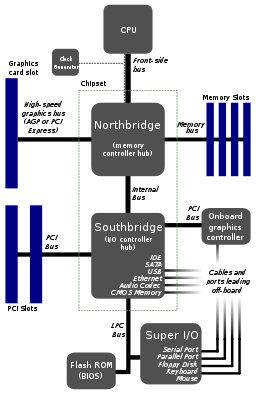 There are several ways in which a motherboard can be characterised, in particular the following:

the form factor,
the chipset,
the type of processor socket used,
the input-output connectors. 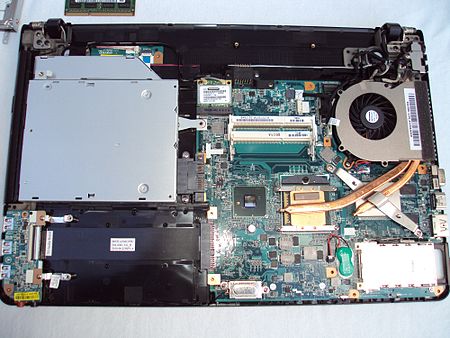 The term “form factor” is normally used to refer to the motherboard’s geometry, dimensions, arrangement, and electrical requirements. In order to build motherboards which can be used in different brands of cases, a few standards have been developed:

t is a format used in the earliest 386 and 486 PCs. This format was replaced by the ATX format, which shape allowed for better air circulation and made it easier to access the components;
ATX: The ATX format is an upgrade to Baby-AT. It was intended to improve ease of use. The connection device on an ATX motherboard is designed to make plugging in peripherals as easy as possible (for example, the IDE connectors are located beside the disks.) What’s more, motherboard components are arranged in parallel, so as to improve heat removal.
ATX standard: The ATX standard format is traditionally 305×244 mm. It includes an AGP connector and 6 PCI connectors.
micro-ATX: The microATX format is an upgrade to ATX, which has the same primary advantages in a smaller format (244×244 mm), with a lower cost. Micro-ATX includes an AGP connector and 3 PCI connectors.
Flex-ATX: FlexATX is an expansion of microATX which offers manufacturers greater flexibility when designing their computers. It includes an AGP connector and 2 PCI connectors.

mini-ATX: miniATX is a compact alternative to the format microATX (284×208 mm), and includes an AGP connector and 4 PCI connectors instead of 3 that come with microATX. It is mainly intended for mini-PCs (barebone computers).
BTX: The BTX format (Balanced Technology eXtended), supported by Intel, is a format designed to improve upon the arrangement of components, so as to optimise air circulation, acoustics, and heat dissipation. The various connectors (memory slots, expansion slots) are aligned in parallel, in the direction in which air circulates. Additionally, the microprocessor is located in the front end of the case, by the air intake, where the air is freshest. The BTX power cord is the same as with ATX power supplies. The BTX standard defines three formats:
BTX standard, with standard dimensions of 325×267 mm;
micro-BTX, with small dimensions (264×267 mm);
pico-BTX, with much smaller dimensions (203×267 mm).
ITX: The ITX format (Information Technology eXtended), supported by Via, is an extremely compact format designed for miniature configurations such as mini-PC. There are two major ITX formats:
mini-ITX, with small dimensions (170×170 mm) and a PCI slot;
nano-ITX, with extremely small dimensions (120×120 mm) and a miniPCI slot. For this reason, the choice of the motherboard (and its form factor) depends on which case is chosen. The table below summarises the characteristics of the various form factors.

The motherboard includes some on-board components, meaning that they are integrated into its printed circuitry:

The chipset, a circuit which controls the majority of resources (including the bus interface with the processor, cache memory and random-access memory, expansion cards, etc.)
The CMOS clock and battery,
The BIOS,
The system bus and the expansion bus.

What’s more, recent motherboards generally include a number of onboard multimedia and networking devices which can be disabled:

The chipset is an electronic circuit whose job is to coordinate data transfers between the various components of the computer (including the processor and memory). As the chipset is integrated into the motherboard, it is important to choose a motherboard which includes a recent chipset, in order to maximise the computer’s upgradeability.

Some chipsets may include a graphics or audio chip, which means that it is not necessary to install a graphics card or sound card. However, it is sometimes advised to disable them (whenever possible) in the BIOS setup and to install high-quality expansion cards in the appropriate slots.

The CMOS clock and battery

The real time clock (or RTC for short) is a circuit which synchronises system signals. It is made from a crystal which, as it vibrates, gives off pulses (called timer ticks) in order to keep the system elements running on the same time. The timer frequency (expressed in MHz) the number of times the crystal vibrates each second, i.e. the number of timer ticks per second. The higher the frequency, the more information the system can process.

When the computer is turned off, the power supply stops providing electricity to the motherboard. When the computer is turned on again, the system is still on the right time. An electronic circuit, called the CMOS (Complementary Metal-Oxyde Semiconductor, sometimes called the BIOS CMOS), saves some system information, such as the time, the system date, and a few essential system settings.

The CMOS is kept powered by a battery (a button battery), or a battery located on the motherboard. Information on the hardware installed in the computer (such as the number of tracks or sectors on each hard drive) are stored in the CMOS. As the CMOS is a form of slow storage, certain systems sometimes recopy the CMOS’s content into the RAM (fast storage); the term “memory shadow” is used to describe this process of copying the data into RAM.

The “complementary metal-oxide semiconductor” is a transistor manufacturing technology, the latest in a long line which includes the TTL (“Transistor-transistor-logic”), the TTLS (TTL Schottky) (faster), or the NMOS (negative channel) and PMOS (positive channel).

The CMOS allows many complementary channels to run on a single chip. Compared with TTL or TTLS, CMOS is much slower, but it consumes far less energy, which is why it is used in computer clocks, which run on batteries. The term CMOS is sometimes incorrectly used to refer to computer clocks.

When the system time keeps getting reset, or the clock runs late, all that is usually necessary is to change the battery.

The BIOS (Basic Input/Output System) is the basic program used as an interface between the operating system and the motherboard. The BIOS is stored in ROM (read-only memory, which can not be rewritten), so it uses data contained within the CMOS to find out what the system’s hardware configuration is.

The BIOS can be configured using an interface (named the BIOS setup), which can be accessed when the computer is booting just be pressing a key (usually the DEL key. In reality, the BIOS setup is only used as an interface for configuration; the data is stored in the CMOS. For more information, check your motherboard’s manual.)

The processor (also called the microprocessor) is the computer’s brain. It runs programs using a set of instructions. The processor is characterised by its frequency, the rate at which it executes instructions. This means that an 800 MHz processor can carry out 800 million operations per second.

Within these two large families, there are different versions used, depending on the type of processor. Whatever slot or socket is used, it is essential that the processor be inserted gently, so that none of its pins are bent (it has hundreds of them). To make inserting them easier, a concept called ZIF (Zero Insertion Force) has been created. ZIF sockets have a small lever, which, when lifted, allows the processor to be inserted without applying any pressure, and when lowered, it holds the processor in place.

The processor generally includes some sort of foolproof device, in the form of a notched corner or coloured markings, which must be aligned with the corresponding markings on the socket.

RAM (Random Access Memory) is used to store data while the computer is running; however, its contents are wiped out as soon as the computer is switched off or restarted, as opposed to mass storage devices such as hard drives, which keep information safe even while turned off. This is why RAM is called “volatile.”

Why, then, is RAM used at all, when hard drives cost less per byte stored? The answer is that RAM is extremely fast when compared to mass storage devices like hard drives. It has a response time on the order of a few dozen nanoseconds (about 70 for DRAM, 60 for EDO RAM, and 10 for SDRAM; as little as 6 ns for DDR SDRAM) as opposed to a few milliseconds for a hard drive.

RAM comes in the form of modules which plug into motherboard connectors.

Expansion slots are compartments into which expansion cards can be inserted. These are cards which give the computer new features or increased performance. There are several types of slots: 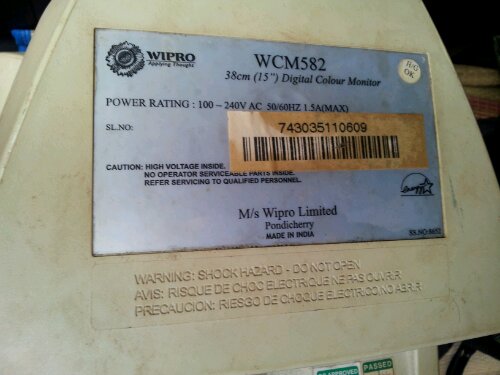 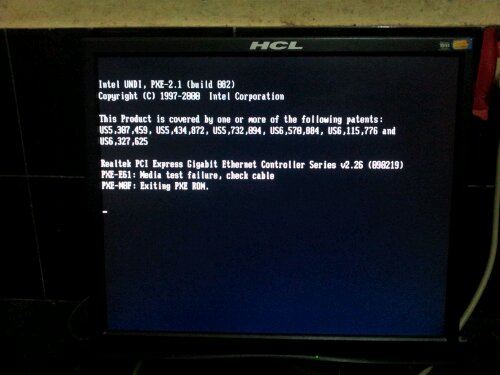 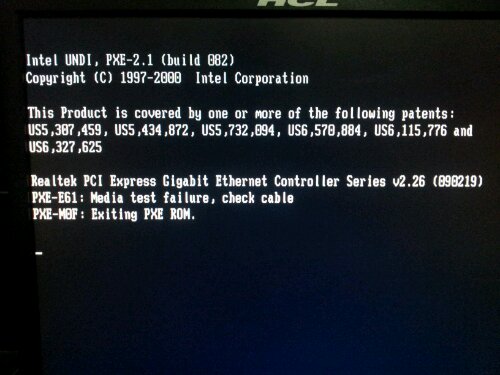 
MAPLOADER.EXE is a virus file. 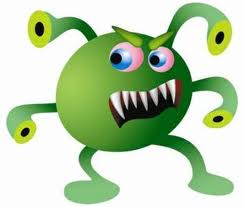 Manual Removal of MAPLOADER.EXE:
1. For Windows Me and Windows XP users, System Restore must be disabled to prevent the MAPLOADER.EXE virus from restoring itself.
2. Update installed antivirus programs.
3. Reboot computer in SafeMode.
4. Run your antivirus program manually with a full system scan and clean/delete all infected file(s)
5. Restart the computer.

Note: Above result based on the samples we received of the file MAPLOADER.EXE, not means all the orginal MAPLOADER.EXE file is a virus or threat.

My studies on Operating Systems will be continuing in my next series of blogs… It is so interesting.