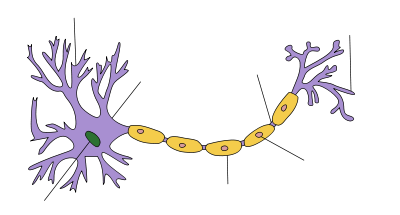 Several types of cells support an action potential, such as plant cells, muscle cells, and the specialized cells of the heart (in which occurs
the cardiac action potential ).

However, the main
excitable cell is the neuron , which also has the simplest mechanism for the action potential.

Neurons are electrically excitable cells composed, in general, of one or more dendrites , a single soma, a single axon and one or more
axon terminals. The dendrite is one of the two types of synapses, the other being the axon terminal boutons.

Dendrites form protrusions in
response to the axon terminal boutons. These protrusions, or spines, are designed to capture
the neurotransmitters released by the presynaptic neuron.

They have a high
concentration of ligand activated channels. It is, therefore, here where synapses from two
neurons communicate with one another. These spines have a thin neck connecting a bulbous
protrusion to the main dendrite.

This ensures that changes occurring inside the spine are less likely to affect the neighbouring spines. The
dendritic spine can, therefore, with rare exception (see LTP ), act as an independent unit.

The dendrites then connect onto the soma. The soma houses the nucleus , which acts as the regulator for the neuron.

Unlike the spines, the surface of the soma is populated by voltage
activated ion channels. These channels help transmit the signals generated by the dendrites.

Emerging out from the soma is the axon hillock . This region is characterized by having an
incredibly high concentration of voltage-activated sodium channels.

In general, it is
considered to be the spike initiation zone for action potentials.

Multiple signals generated
at the spines, and transmitted by the soma all converge here. Immediately after the axon
hillock is the axon . This is a thin tubular protrusion traveling away from the soma.

The axon is insulated by a myelin sheath. Myelin is composed of either Schwann cells (in the
peripheral nervous system) or oligodendrocytes
(in the central nervous system), types of glial cells . Although glial cells are not involved with
the transmission of electrical signals, they communicate and provide important biochemical support to neurons.

(Note: I some how have a strange feeling, a connection between “Soma”-“action potential” & Veda)

What is Life?
Properties of Life:

The neural network in a Hydra
This system is not centralized and thus local stimulation gives mostly local response
*****************
A slightly more centralized nerve system in jellyfish:Neural ring around opening of medusa is the “central” system for coordinating swimming motions

Peripheral nerves connect to cnidoblast, so when a nematocyst is fired, a signal goes back to the nerves in the mouth to direct it to potential prey.

in flatworms there is an evolutionary progression from:…a nerve net as in the hydra.
…to a cephalized system with two major longitudinal nerves.

The nerve system in round worms has less than 300 nerves, 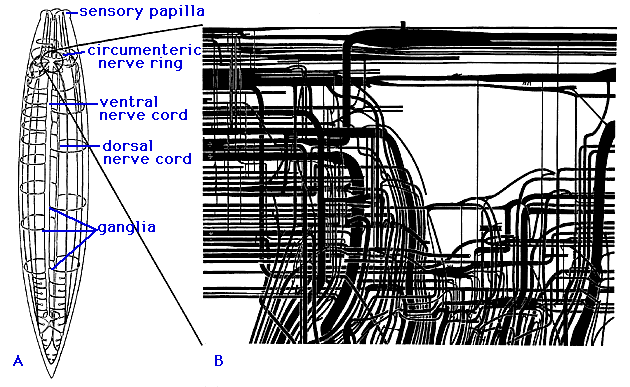