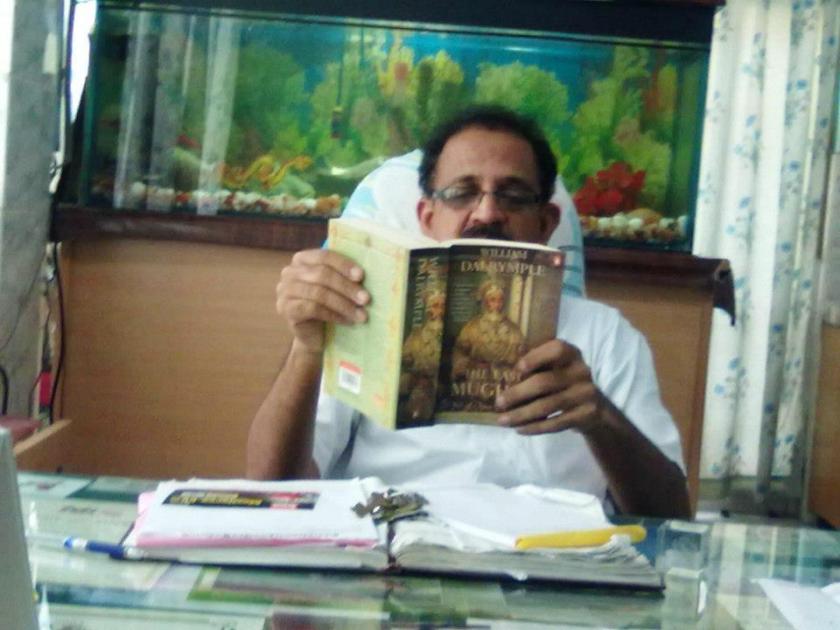 He reads now : The Last Mughal , William Dalrymple’s brilliantly nuanced account of the Indian mutiny of 1857

History written by Britons has not been kind to Bahadur Shah II, even though he was the last of the Mughal emperors of India, a descendant of both Genghis Khan and Timur the Great (Marlowe’s Tamburlaine), among others who are much better remembered. He has rarely rated more than a paragraph or two, sometimes only one sentence, and as often as not has been referred to merely as the King of Delhi – which is rather like describing the Pope as the Bishop of Rome in order to diminish him. But now William Dalrymple has magnificently rescued him from near anonymity, and in doing so has greatly increased our understanding of what went on in the old Mughal capital at the time of the Indian mutiny.

The last emperor was also known to his familiars as Zafar – the pen name he used when writing poetry – a word which means “victory” and which could scarcely have been less appropriate, given that it was attached to one of history’s great losers. For he died five years after the mutiny, in faraway Burma, a frail 87-year-old who was spoon-fed on broth by the handful of family and retainers he had been allowed to take with him into exile. He had been banished not so much for what he did during the mutiny as for what he represented to the mutineers – Hindus as well as Muslims – who regarded him as the touchstone of an old and deeply rooted way of life which the Victorian Evangelicals, who dominated the making and execution of British policy, were determined to replace with the prejudices and habits of muscular Christianity. To them it was vital that Zafar should be put down, precisely because, having a Hindu mother, he appealed to both sides of India’s own great religious division.

Delhi, however, was a profoundly Muslim city at this time, unlike Lucknow, Calcutta and other centres that had found certain western habits attractive and were beginning to evolve into multicultural cities. The capital was therefore regarded with particular enmity by people such as the Rev Midgeley John Jennings, who wrote: “Within its walls, the pride of life, the lust of the eye and all the lusts of the flesh have reigned and revelled to the full, and all the glories of the Kingdoms of this portion of the earth have passed from one wicked possessor to another.” As Dalrymple depressingly notes, such caricatures are still circulating in the western anathemas of Islamic societies today. No longer were Britain’s Indian policies in the 1850s conducted by the likes of Warren Hastings and William Jones, who understood and respected Indian values and traditions. Instead, “this steady crescendo of insensitivity” on the part of people like Jennings and their governing superiors was directly responsible for the mutiny: the gaffe (and it was no more than that) of the greased cartridges was simply the last straw for the already resentful sepoys who mutinied. If the army had followed its instructions – that goat or mutton fat would not offend the religious susceptibilities of either Hindu or Muslim soldiers, but that on no account must either beef or pork fat be used – there would have been no problem.

The worst charge that could be laid against Zafar, in fact, was his indecisiveness, which plagued him in his domestic life as well as in the more hazardous area of interracial politics. His crucial mistake was to give his blessing to the sepoys, but only after they had persistently harassed him and more or less taken over his palace until he gave in to their demands. Within days, as the British residents of Delhi fled for their lives, Zafar gave his protection to 40-odd of those who had been captured when they tried to escape. Some might see this as a hedging of bets, but it was, in truth, the reflex of a lifelong ditherer; and that is not the stuff of which rebel leaders are made.

He had earlier insisted on retaining his doctor after the man had converted to Christianity, in spite of pressure from Muslim courtiers to sack him. A British surgeon who attended Zafar in his captivity said: “His countenance gave no sign of cruelty, but appeared mild.” WH Russell, the celebrated correspondent of the Times, wrote of “a dim, wandering eyed, dreamy old man with a feeble hanging nether lip and toothless gums”, who was being sick in a basin when the journalist entered his room. “I could not help thinking, as I looked at the old man, that our rulers were somewhat to blame for the crimes he had committed.”

There was savagery on all sides in 1857, while at home Lord Palmerston wanted to see Delhi deleted from the map in reprisal for what had happened there. Atrocities against the British were also committed at Kanpur, where women and children were butchered without mercy, too, which guaranteed the appalling retribution that followed when the rebellion was put down. John Nicholson, who became a cult figure among his native troops (they thought he was an incarnation of Vishnu) and his fellow countrymen, proposed “a bill for the flaying alive, impalement or burning of the murderers of the [British] women and children of Delhi”; and one of his soldiers (a Quaker, no less) habitually bayonetted sepoys while chanting Psalm 116. That’s the one that begins “I am well pleased: that the Lord hath heard the voice of my prayer”.

Dalrymple has here written an account of the Indian mutiny such as we have never had before, of the events leading up to it and of its aftermath, seen through the prism of the last emperor’s life. He has vividly described the street life of the Mughal capital in the days before the catastrophe happened, he has put his finger deftly on every crucial point in the story, which earlier historians have sometimes missed, and he has supplied some of the most informative footnotes I have ever read. On top of that, he has splendidly conveyed the sheer joy of researching a piece of history, something every true historian knows, telling of his elation at discovering in Burma’s national archives all Zafar’s prison records, stored in Acrobat PDF files – “something the British Library has so far failed to achieve”.
http://www.guardian.co.uk/books/2006/nov/11/featuresreviews.guardianreview6
http://en.wikipedia.org/wiki/Mughal_Empire